Before You Launch Another Checklist, Find out Why Staff Might Not Use It

Your staff’s belief bias—or the tendency to validate one’s own worldview—can thwart even the best strategies. Before handing them a checklist or policy/procedure, consider what they really think about a new initiative or organizational change.

. For years we’ve met with hospital executives who are disappointed that their initiatives are not having the expected impact or that improvements initially achieved weren’t sustained. Why do leaders end up in such an unfulfilled state, and why are they so often left to analyze another failed change effort?

Here’s the conclusion we’ve reached: Most change efforts rely exclusively on tactical behavior and actions to drive change, while ignoring staff experiences and belief bias, which can thwart the best strategies and plans before they even get started. In other words, most change management efforts rely heavily on checklists, complex action plans, and new operating procedures, which are handed to staff who are already buried in action plans and checklists. At the same time, prior staff knowledge and their beliefs about how the change will affect them are never considered.

Don’t fall into the trap of another checklist. Download our eBook and discover more effective ways to impact your hospital 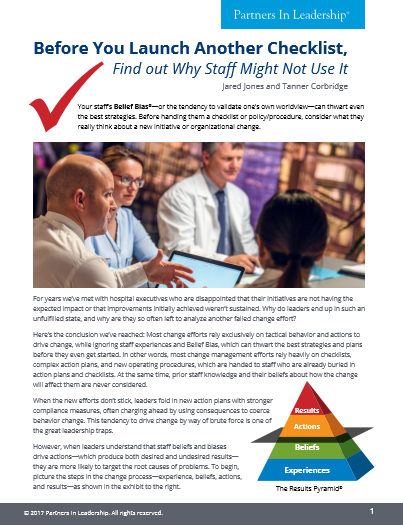