Seeking effective, meaningful feedback is the life force of innovation, the mark of an engaged and collaborative leader, and a critical predictor of future success.

For every leader who values the free flow of feedback across an organization, there’s an expert arguing that the dynamic is fundamentally flawed. Feedback is far too subjective, they say; it is frequently skewed in a way that is either overly negative or unduly flattering. Further, its delivery tends to be clumsy and ineffective.

Shaping this belief are leaders who leverage feedback ineffectively. Executed poorly, feedback creates experiences that deflate morale and negatively impact people’s willingness to engage at work. Even when viewed as a threat, feedback elicits greater cortisol responses in the brain, potentially leading to negative emotional effects. At its worst, feedback is weaponized, wreaking havoc on everything from employee relations to bottom line business results.

All of these outcomes perpetuate the belief that feedback is ineffective at driving positive results, and therefore a waste of time.

It’s no wonder that so many hold negligent or avoidant attitudes toward feedback. The Partners In Leadership Culture Advantage Index® reveals that a mere 5% of employees strongly agree that others in their organizations ask for feedback when it may be hard to receive.

By normalizing feedback-seeking in organizational culture, leaders drive productivity, innovation, and organization-wide performance. While the conversation regarding feedback remains an important debate, too much attention is spent evaluating the techniques by which leaders provide feedback and coach employees. As a result, the most critical considerations—namely, how leaders use feedback to effectively gain insights outside their purview—go ignored.

When you invest more in seeking feedback from people at every level of the organization, you pinpoint potential gaps in performance, and, equally important, you demonstrate that you value others and their diverse perspectives. The experience of asking for and receiving feedback in the right way creates a host of benefits for you, your colleagues, and the organization, ultimately improving short- and long-term results.

Everyone sees the world from their own subjective viewpoint, resulting in an incomplete picture of reality. Feedback expands this perspective, giving you insight and intelligence into how others experience you and your performance. This information directs new ways of thinking, positively impacts relationships, and informs business strategy. 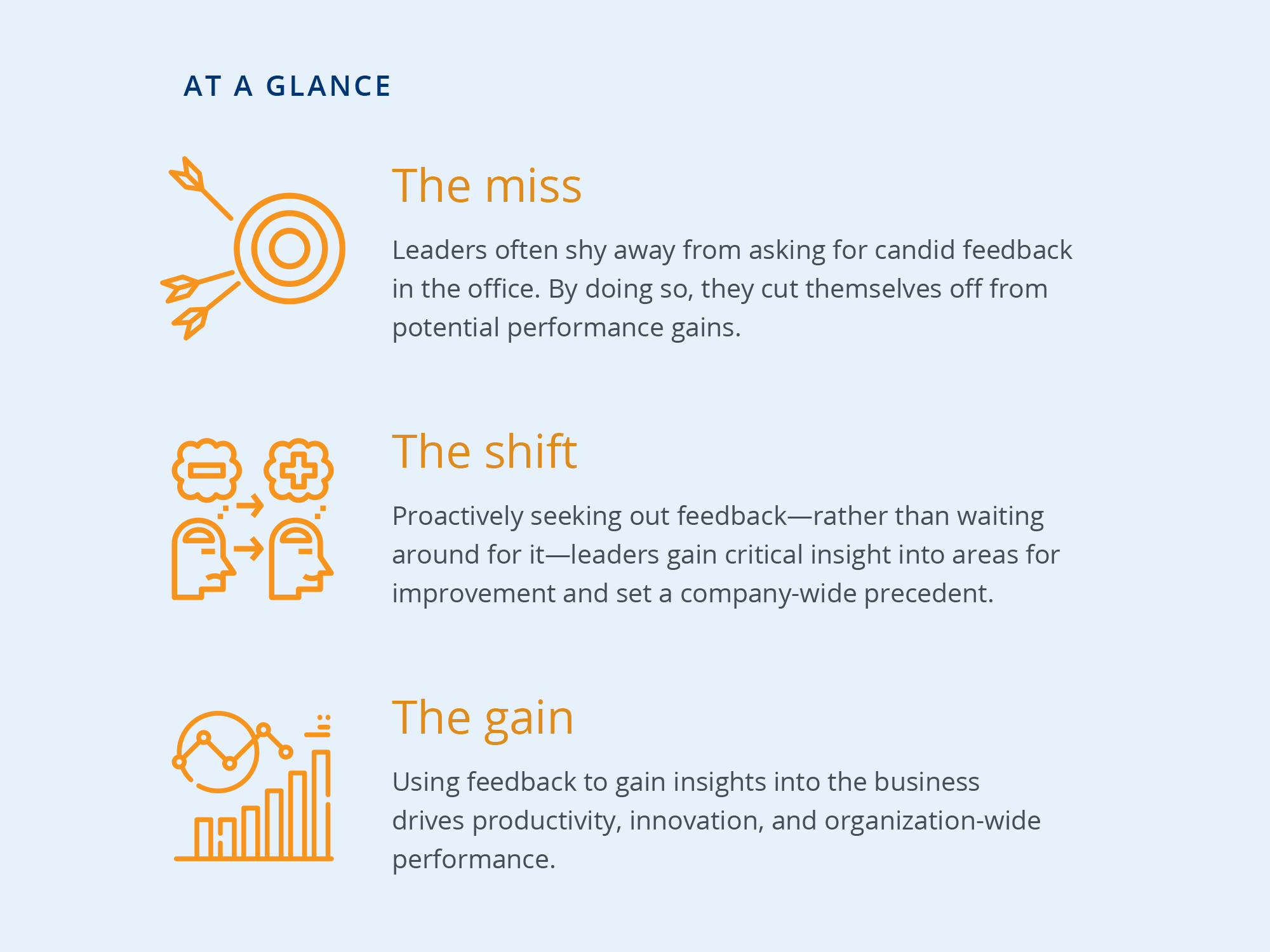 When you regularly model the behavior of seeking feedback—rather than waiting for it—this habit becomes a cultural norm. You build an environment in which employees at every level seek feedback from others about how they demonstrate company values or execute on strategy. In doing so, employees are able to see beyond their limited perspective, are more engaged with their daily work, and take greater accountability for achieving shared business results. They innovate and execute at higher speeds and with greater impact.

So why is it that 74% (including leaders) are unwilling to ask for and receive constructive feedback—or are defensive when they receive it? In general, it is because they have a fundamental misunderstanding of how to get feedback or how it adds value to their professional development, the development of the business, and the achievement of organizational results.

How can you create a positive feedback-rich workplace culture in which employees actively seek out the opinions of others? Let’s examine.

The Power of Seeking Feedback 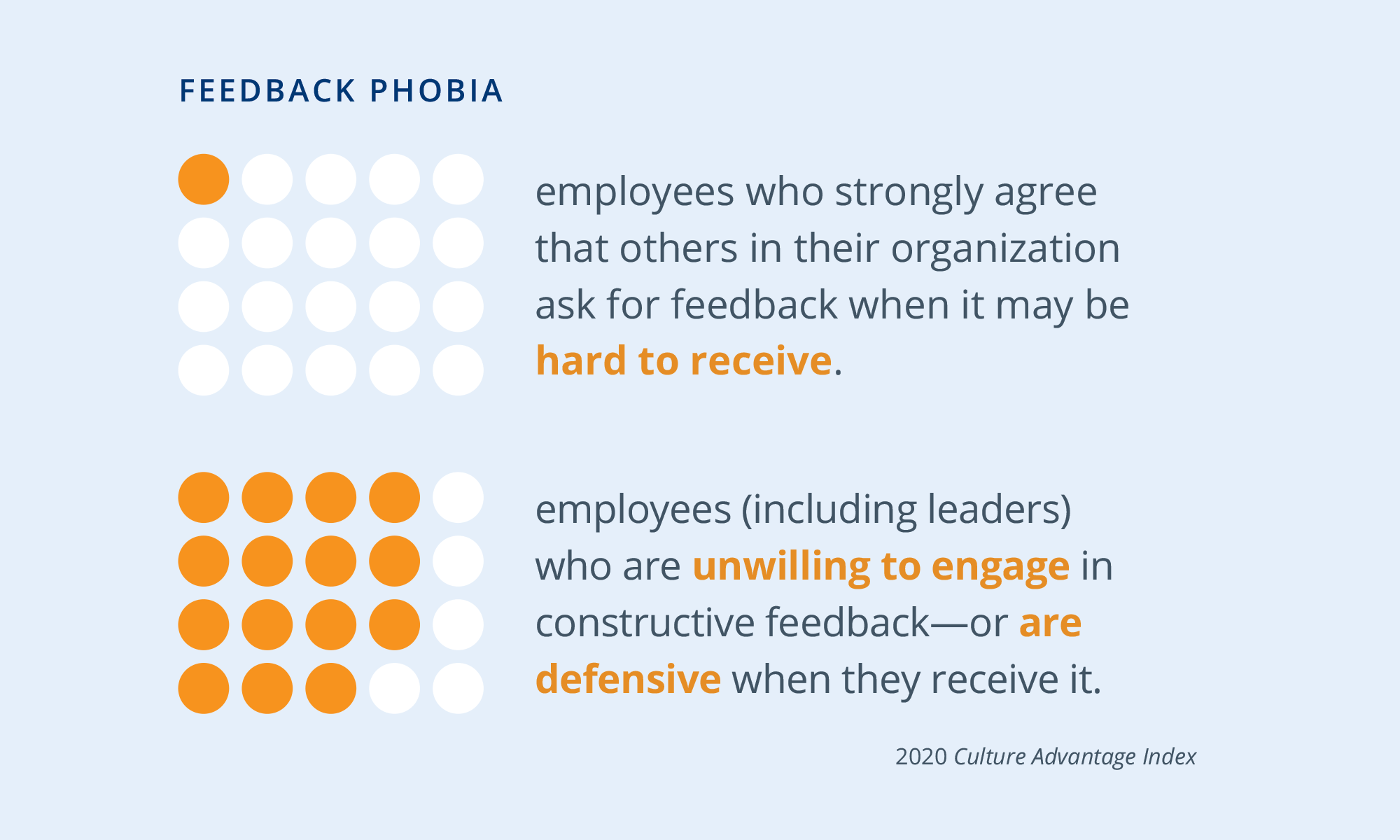 The story of Bristol Farms, a leading Southern California grocery retailer, serves as an effective example of positive feedback-seeking in action. When the organization underwent a series of buyouts, its company culture suffered. Each investment company brought with it new priorities and business strategies. Every time the company adjusted to the changes, it was acquired again. The constant change resulted in inconsistent expectations, a clash of cultures, and mixed messages.

As this pattern continued throughout the years, the organization’s culture became extremely dysfunctional. Employees were disengaged, dissatisfied, and weary. Adam Caldecott, who became President & COO in 2015 (CEO as of January 2018), saw the danger of the culture that had taken hold. He decided to make culture a priority. Establishing a feedback-focused attitude across the organization became his first priority.

By actively asking for feedback during one-on-one meetings with employees and at large group meetings, Caldecott began to set a new standard in the workplace. “It’s hard to be vulnerable,” said Yolie Pepin, Vice President of Human Resources at Bristol Farms, “but again and again [Caldecott] put himself out there so people could tell him whatever they felt they needed to tell him and he responded.” 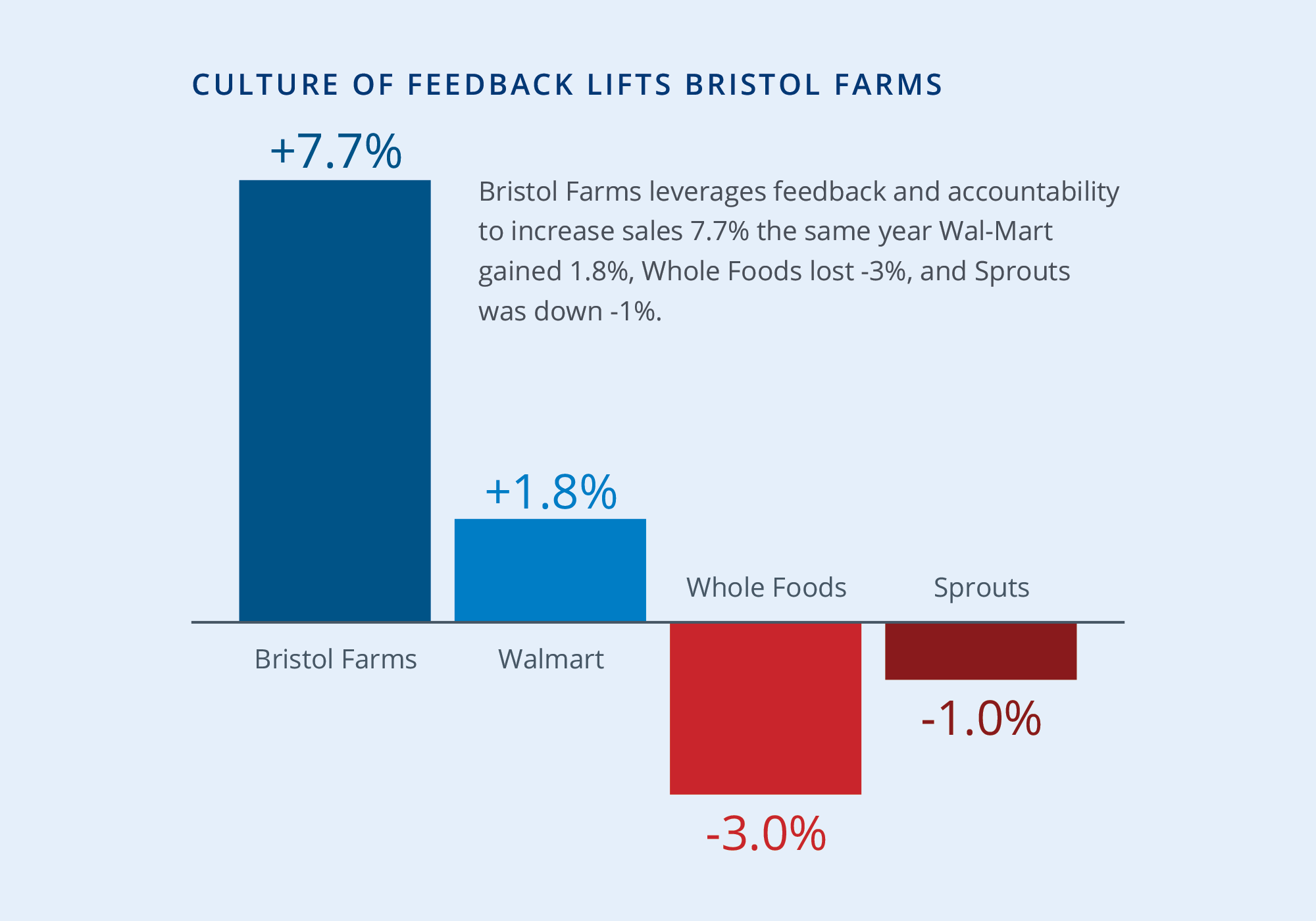 By being completely transparent about his intentions, and ensuring others received the same guidance and direction he had regarding how to use this simple tool effectively, he created a cultural norm and spurred a movement. Employees at all levels became comfortable asking for feedback; they also began to provide it in a more useful way. Led from the top, a new culture of feedback took root.

Led from the top, a new culture of feedback took hold. As a result, positive accountability began to flourish, leading to strong financial growth. In fact, Bristol closed out the year at a 7.7% increase in sales and lifted the POD to 22%. Their competitors’ results paled in comparison. Wal-Mart was up 1.8%, Whole Foods down -3%, Sprouts was mostly flat at -1%, and Kroger had its first negative comparable in 13 years.

When this approach is scaled for application in global companies, the results are amplified. Integrating feedback exchanges within the culture of an organization empowers all employees to be their best. Data from the Partners In Leadership Culture Advantage Index indicates that when organizations get culture right, employees are 76% better at working together across the organization to handle things quickly and 69% more willing to navigate changing situations.

1. Put feedback on the agenda.

If it’s important enough to meet, it’s important enough to exchange feedback. Pair team members up at the beginning of your next meeting and ask them to seek feedback from each other. Ask them to take three minutes each to ask for both appreciative and constructive feedback on a core value, cultural belief, project goal, or another specific topic. The process need not take longer than ten minutes and will increase the engagement and effectiveness of the meeting. In this way, you set a precedent that feedback is important at every step in the process.

2. Seek feedback in your one-on-ones

One-on-one feedback exchanges can open the door for radical honesty and also offer the time and space to delve into ideas more deeply. Ensure these meetings are regular occurrences—agree on a weekly or monthly time with your direct reports in which you seek their honest feedback and encourage the open flow of creative ideas.

The more specific the feedback, the more useful it is. Instead of asking general questions that can be answered with “yes” or “no”, such as, “Do you have any feedback for me?”, ask, “What feedback do you have for me around [insert a specific topic]?” By framing the question with a sense of focus around a specific subject, you are likely to receive a more detailed and honest response. Further, this model demonstrates a willingness to engage genuinely and meaningfully with the opinions of others.

4. Reward those that seek feedback

Don’t relegate feedback to annual performance reviews. Make it an ongoing conversation. When end-of-year reviews roll around, you have an opportunity to reinforce and incentivize patterns of behavior that benefit the organization’s topline performance. It’s in the organization’s best interest to reward people who seek feedback regularly. Look for ways to reward your direct reports for helping to weave feedback-seeking into the cultural fabric of the organization.

5. Highlight the feedback you receive

Appropriately sharing some of the feedback that you’ve received demonstrates the value and impact of regularly asking for feedback. By saying something along the lines of, “I’d like to share with you some valuable feedback I received recently—and what I’m doing to act on it,” you send powerful messages to employees. You express the following: (1) that you are serious about wanting feedback; (2) that you value the perspectives of others; (3) that you translate feedback into real action; (4) that you are invested in continual Improvement, and; (5) that you actively model the behavior that you expect from others in the organization.

6. Ask others about the feedback they receive

Ask colleagues and direct reports, “What feedback have you received recently that you value, and what are you doing to act on it?” When you regularly assess the impact of feedback in the workplace, you encourage team members to make a habit of seeking feedback and reinforce the ways in which this feedback can and should be leveraged to drive shared business results.

Because feedback and accountability are so intimately connected, the rate at which employees at all levels seek feedback serves as an effective metric by which to assess overall team performance. The Partners In Leadership Culture Advantage Index accurately measures how a team or organization is progressing with feedback. This measurement tool equips decision-makers with critical information about the dynamics between colleagues, and provides a baseline for tracking ongoing progress. 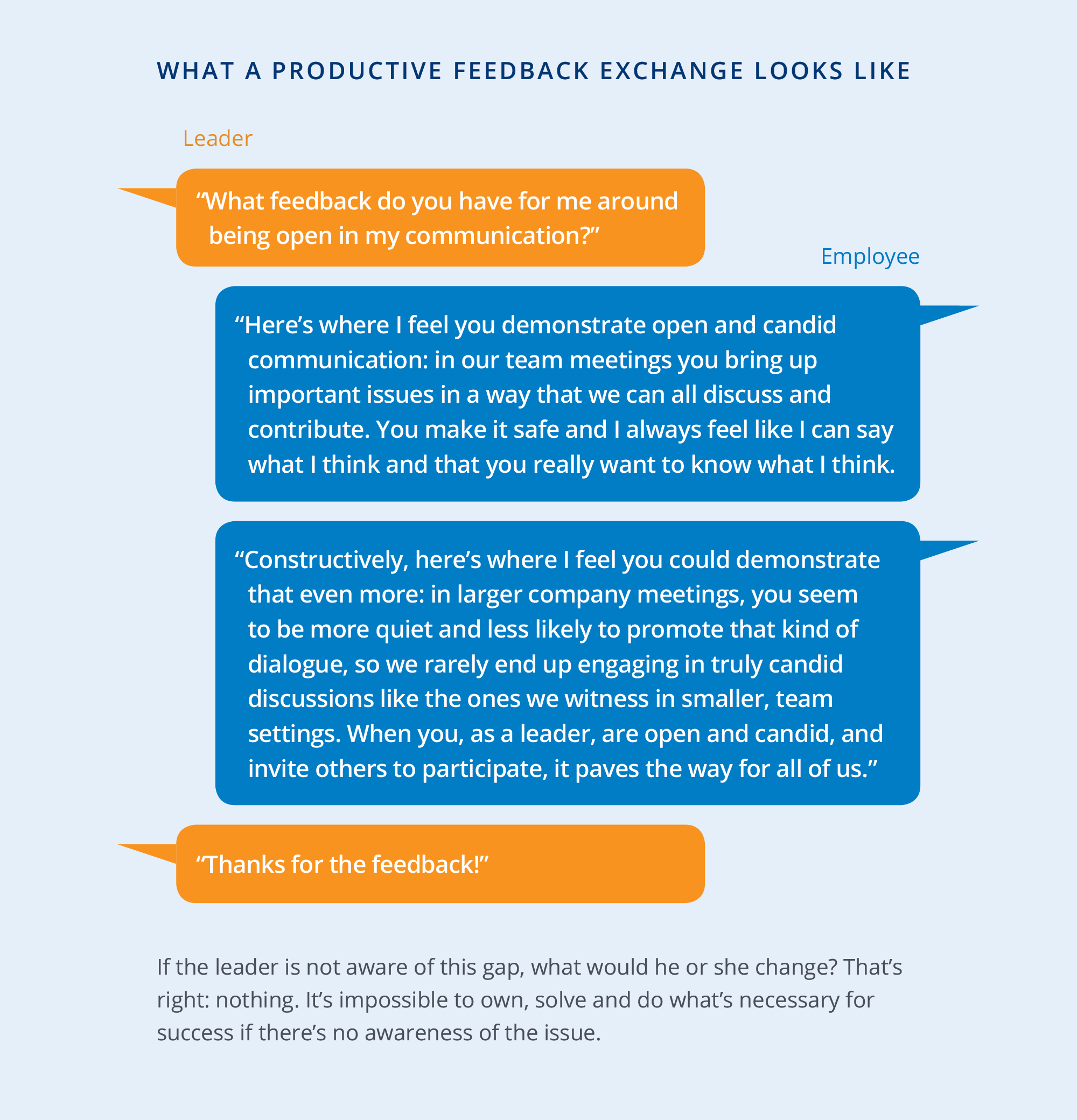 Put Feedback at the Heart of Your Business Strategy

With a primary focus on giving—rather than seeking—feedback (or a habit of avoiding the topic altogether), teams cripple themselves by forgoing the opportunity to empower people to excel. If you want to guarantee that your organization maintains long-term financial viability and a competitive edge in the market, you can’t afford to get feedback wrong.

Improved execution on feedback requires a focused, continued effort. Fortunately, every conversation—whether with a peer, a board member, a direct report, or a new hire—is an opportunity for you to get feedback and model this powerful leadership habit. And accountable people seek feedback.

Investing in this approach to feedback means investing in a more powerful business strategy. In fact, there is proven statistical connection between the rate at which you seek feedback and the degree to which you take accountability for results. Building a feedback-seeking culture equates to better long-term business outcomes. And that’s what great leaders do. Getting feedback right makes all the difference.

Marcus Nicolls
As a Senior Partner, Author, and SVP of the Culture Business Unit for Partners In Leadership, Marcus is an integral member of the company’s leadership team.
> View bio